This Week in Gun Rights

FPC is suing EVERYONE.  International gun purchases are increasing due to COVID-19 concerns.  Unintentional firearms fatalities reaching lowest levels ever. The feds have lost their guns, again.  A Georgia lawmaker is using COVID-19 as cover for pushing massive federal gun legislation.

FPC is suing EVERYONE.

Where to start. This week has been wild, especially for us at FPC. The past couple of weeks have seen a significant increase in “stay-at-home” and “shelter-in-place” orders across the country. These orders often include verbiage which prevents small-business owners like many gun shop proprietors from selling their wares to law-abiding individuals. Individuals who most assuredly consider a mechanism to defend their lives “essential.” To put it shortly: it’s clear that tyrants are having no problem doing their work from home. We patriots can too, and I expect we can do it better.

Many of these emergency orders are probably copy pasta, but let’s be clear: whether the inhibition of firearms sales was accidental or intentional means nothing. The right of the people to keep and bear arms necessitates the ability to freely acquire arms, as it’s difficult to “keep” or “bear” what you can’t get your hands on in the first place. It doesn’t matter whether you’re the Governor of California, Lord-Emperor of the People’s Republic of New York, or the three-county state of Delaware. We’re paying attention. That’s why we’ve set up this hotline for people, anywhere in the country, who have had their rights violated, to let us know.

So far, FPC has launched suits against New Jersey, the State of California, Los Angeles, the Bay Area, Wake County, NC, with much more to come in our most assuredly “high capacity” pipe.

It’s very difficult to track these municipal violations. That’s why I’m asking for help. If you’re a law abiding person, over the age of 21, who wants to get a gun, or wants to sell guns, and are being prevented from doing so due to a COVID-19 related government action, please get in touch.

International gun purchases are increasing due to COVID-19 concerns

By now everyone is aware that guns and ammo are flying off the shelves in America. What many people probably didn’t anticipate was that the same thing would happen to America’s Hat and in places across the pond like Hungary.

What does it all mean? People are concerned for their safety, everywhere, and rightly so. Unfortunately, it also means that in places like Canada, where supply chains are especially strained due to excessive governmental interloping, many would-be owners are going to find that they’re unable to purchase a gun in the near future, and that they will have to ride out the pandemic with what they have.

You’ll shoot your eye out, kid. Or maybe not, says the National Shooting Sports Foundation, which is reporting this month that unintentional firearms fatalities have reached their lowest level ever, despite melodramatic claims that the recent surge in firearms sales will result in a significant increase in firearms-related harm. In fact, the National Safety Council reported that in 2018, there were only 458 accidental firearms fatalities, constituting less than 1% of all recorded fatalities that year. What’s the trick, you ask? It’s safe handling and maintaining “positive control” over your firearms. Responsible gun owners understand when, how, or if it’s safe to leave their firearms unattended. Given the increase in firearms purchases this month it’s especially important to pass this kind of knowledge on to others who may be first-time gun owners.

The feds have lost their guns, again.

Fidelity. Bravery. Integrity. Poor chain of custody for firearms and anything else valuable. These are the things the FBI and certain other organizations under the DOJ are known for, so it should come as no surprise that between September 2016 and July 2019, 38 special-agents were punished for losing 45 government-issued firearms. I’m not sure if they lost their guns breakdancing, but hey, at least it wasn’t 449 like last time.

Everybody is talking about legislation centered around paychecks for the masses, bailouts, and the willingness of the political mainstream to play the fiddle while America burns. But what they’re not talking about is H.R. 5717, which would fundamentally alter, if not eliminate, the right to Keep and Bear Arms.

Brought to you by Representative Hank Johnson (D – Georgia), the same smooth-brained genius who thinks you can tip over the island of Guam, some of H.R. 5717’s more authoritarian features include things like a national gun registry, gun-rationing, magazine and semi-automatic firearm bans, and much, much more. That’s why we’re fighting tooth and nail against this bill and its companion, S. 3254. If you’d like to help, stop by our website and help us Stop H.R. 5717. 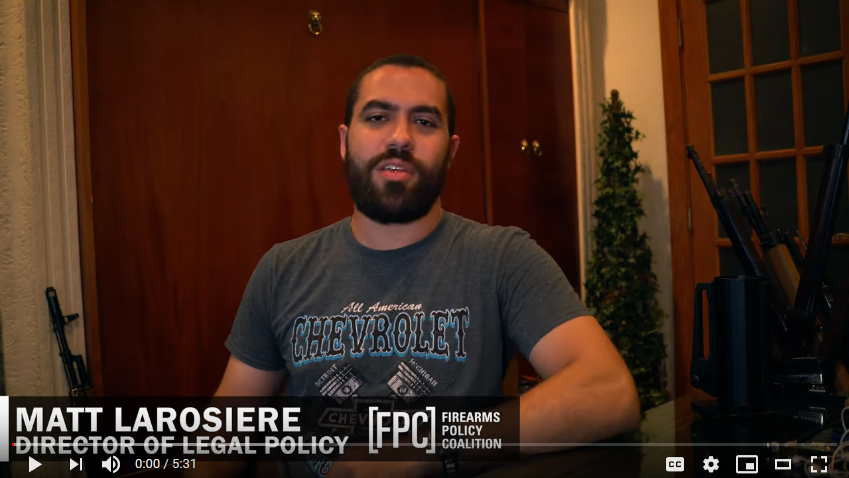