This Week In Gun Rights: May 30, 2020 - Moms wear orange, rifleman stops a mass shooting, gun control laws and suicide, the Big Igloo, the ATF, and Maine. 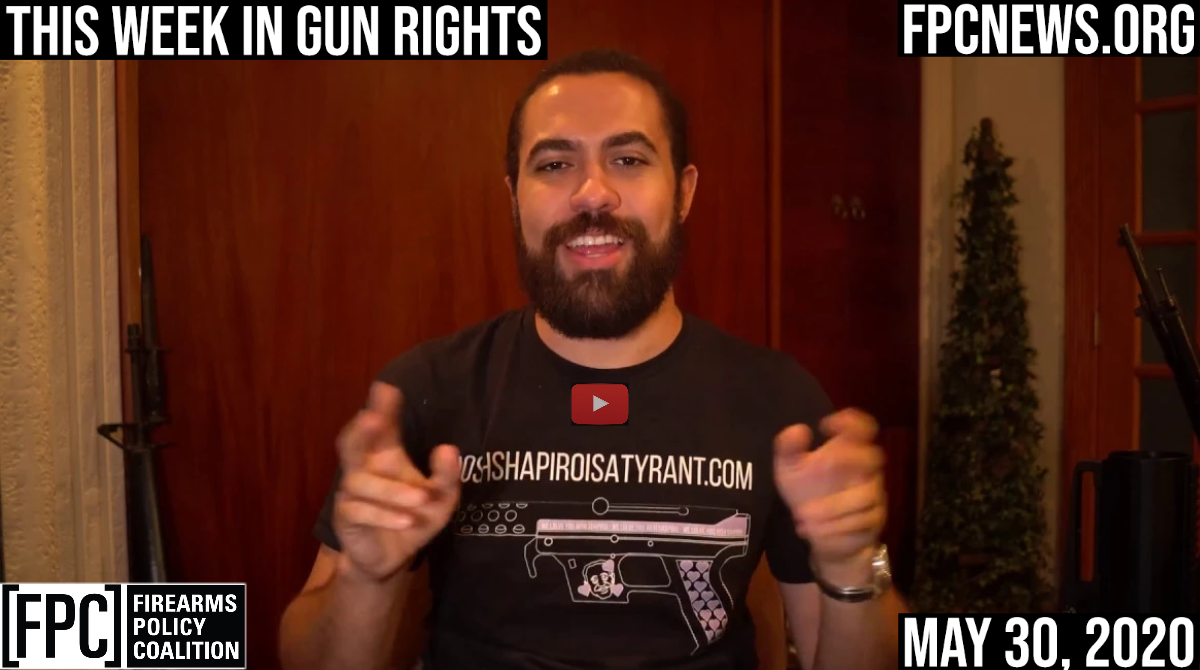 Why are Moms wearing orange next week?

No doubt inspired by the color scheme of a home improvement superpower, Moms Demand members will be wearing hunter orange shirts next Friday for “Gun Violence Awareness Day.” What is Gun Violence Awareness Day, you ask? (or perhaps you strain to ask) Well, dear reader, it’s a day where a carburetion of suburban elites and other wayward, likely unemployed souls bring their children to crime-ridden, densely-populated urban centers like Newark, New Jersey, to walk up and down blocked off streets, ironically decrying a lack of gun control while being guarded by police who are carrying - you guessed it - firearms.

On the lead up to this event you’ll be seeing social media from organizations like Everytown, who are propagating lies like “firearms are the leading cause of death among American children and teens,” which is, according to the CDC, patently false, but consistent with their typical claims. It’s at the very least a good filtering mechanism. I know there’s one color next week that will make me steer far away from people at the check-out lines. If you happen to encounter a pack of these day-glow colored geniuses next week I can only hope you’ll happen to be wearing one of FPC’s awesome pro-gun shirts. I know I will.

In honor of the coming “Wear Orange” day, let’s talk about some people on the other side of our aisle. People have a right to defend themselves and their families, and that right includes the appropriate use of force in some, but not all instances. Apparently this theory wasn’t communicated to Dr. Jennifer Rager-Kay, who said she would shoot unmasked people who attempt to walk within six feet of her. With that in mind, Rager seems to be an appropriate name. Doctor Rager happens to be a school board member backed by the anti-Second Amendment organization Moms Demand Action, who apparently does little to no research on people before bringing them into the fold. Or perhaps they share in these machinations, and that’s why they think nobody ought have a gun. But I digress.

Dr. Rager-Kay isn’t the anti-gun organizations’ most recent mistake. That honor is owed to Peter Manfredonia, who killed two people prior to going on the lam in Pennsylvania and subsequently being captured by police in Maryland. Through 2019, Manfredonia raised money for organizations like Sandy Hook Promise and made multiple social media posts advocating for gun control, using hashtags like #PrayforElPaso and #PrayforGilroy. Of course, these are fairly isolated incidents, and are not data in any way.

The problem with anti-Second Amendment and pro-authoritarian organizations and political campaigns is that they seem to ironically attract people willing to use the firearms they hate to commit violence. Of course Moms Demand, Everytown, and other anti-human rights groups are free to do what they please, but they may want to consider a touch more vetting.

Good guys with guns are everywhere, but their good deeds rarely go reported. That isn’t the case in the village of Kwethluk, Alaska, where an armed citizen came to the aid of unarmed police officers who were being threatened by an armed man. I’m sure you’re wondering why the police were unarmed. Kwethluk is one of the few police agencies in the country whose officers don’t carry firearms. After the suspect began firing, one of the villagers, armed with a rifle, stepped up to the plate. Not only did he courageously step forward, he ended the situation peacefully. The villager talked the assailant into surrendering without firing a shot.

One of the most prominent narratives pitched by the anti-gun crowd is that access to firearms leads to an increased rate of suicide. According to Dean Weingarten and backed by Doctors for Responsible Gun Ownership, that’s simply not true. In fact, while suicides in the United States were increasing, the rate of suicides by firearm were on the decline. But how could that be? Well it turns out that there’s no real correlation between the two.

So why the push for gun control? It’s a ruse. The majority of “gun deaths” (a category I detest as it presents no principled distinction between gun deaths and any other) are by suicide. So, seeking to seize on that statistic, gun controllers cling to it.

Of course, most of the gun control measures being advocated for would have zero impact on suicide. Mr. Weingarten provides three excellent examples of these nonsensical laws - magazine capacity limits, semi automatic firearms bans, and carry restrictions - none of which would affect the ability of an individual to commit suicide.

Who’s afraid of the Big Igloo? Apparently it’s the ATF.

Hawaiian shirts. Igloos. Sidequest memes that include stealing Nancy Pelosi’s vodka and teaching a bear its rights as a sovereign citizen. These are among the many internet jokes within the gun and veteran communities. The phrase “boogaloo” is itself a meme - referring to the oft-overlooked cult classic film Breakin’ 2: Electric Boogaloo. People who share these jokes with one another tend to have two things in common: they’re gun aficionados and they’re not fans of tyranny. But of course, when anti-authority movements begin spreading, even if they quite clearly pose no threat to the public, statists working in government start to get uncomfortable. As a result, we get things like this safety bulletin.

While working with Baltimore Police, ATF-Baltimore released the bulletin, explaining that the “movement consists of members that identify with extreme pro second amendment rights” and that their clothing “mirrors military style apparel, which can also closely resemble that of a law enforcement uniform.”

Well first of all, I didn’t realize that fully embracing a right was “extreme,” but I guess I shouldn’t be too surprised by such a pronouncement. Second, doesn’t it seem kind of inappropriate that the police are so militarized that they might appear to actually be soldiers? Maybe that’s something we need to fix as a country.

Either the ATF is clowning or they actually believe that sharing boog memes is an indication that someone is a member of a vast internet conspiracy to overthrow the government while wearing Hawaiian shirts and listening to trap music. Either way, it should bother you, because the statements in the safety bulletin indicate that they lack the capacity to competently function as a law enforcement agency, which is tragically common these days.

When people are nominated to head Executive Agencies, we typically like to know what their positions and political biases may be regarding the agency subject matter. For example, you would probably want to know what the head of the Bureau of Prisons’ position is on jail conditions, or the Secretary of Education nominee’s position on funding for public or charter schools.

It’s no different for a would-be ATF Director, which is why the nomination for Kenneth Charles “Chuck” Canterbury was pulled last week. Canterbury was described as “very problematic.” Canterbury supported a number of unconstitutional laws including universal background checks, registration, red flag laws, and bans of so-called “assault weapons.” Canterbury was also vehemently opposed to constitutional carry reciprocity. None of this is surprising when you realize that one of Canterbury’s former positions was head of the National Fraternal Order of Police. The Trump Administration’s effort to get Canterbury confirmed has lasted longer than a year, and fortunately the withdrawal of his nomination appears to be final this time.

Did Maine spy on its gun owners? Whistleblower says yes.

Something is afoot in the Pine Tree State, and it doesn’t bode well for gun owners. In a lawsuit filed in federal court earlier this month, a former Maine state trooper indicated that the state police have been maintaining a database on the state’s residents using illegally obtained information. The database, which is allegedly maintained by the Maine Intelligence Analysis Center, included information on individuals who were engaged in lawful protests, worked at a camp for Israeli and Palestinian children, and those who had filed applications to purchase firearms from dealers in the state. Not at all problematic, right?

Aside from the obviously racist and otherwise unconstitutional undertones of monitoring individuals based on their national origin and exercise of their First Amendment rights, the Intelligence Analysis Center’s collection of gun purchaser information violates state law, which requires destruction of applications after the sale to ensure that, you guessed it, the buyer’s information isn’t pumped into a clandestine gun owner registry. While this situation slowly unfolds, keep in mind that there are a number of bills being pushed through the federal legislature which would create the exact same kind of database that’s involved in this case.