Injunction SECURED in gun shop closure suit. With NYSRPA off the Supreme Court docket, what could be the next 2A case? Injunction denied in Georgia carry case. With sales up, Republican Senators are trying to meddle with NICS. Texas sheriff faces calls to resign. Pandemic has some Americans hunting for food. Michigan considering banning guns in state capitol. New Mexico Governor urges Sheriffs to enforce gun laws. 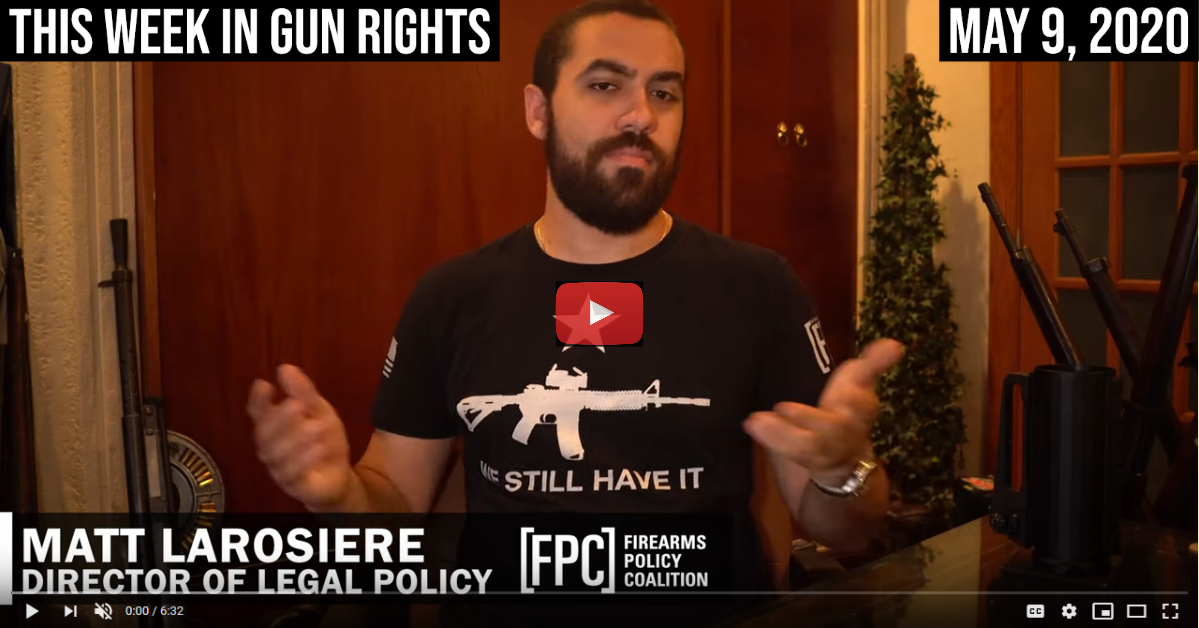 On May 7, 2020 United States District Judge Douglas P. Woodlock issued a preliminary injunction against Massachusetts’ unconstitutional shuttering of gun shops. After two hearings, it was ordered that licensed dealers shall be permitted to conduct sales of firearms and ammunition by appointment only, and observe social distancing requirements.

“We are elated that Judge Woodlock has ordered an injunction against Governor Baker and others so that law-abiding individuals can once again purchase firearms and ammunition,” said Adam Kraut, FPC’s Director of Legal Strategy. “The citizens of Massachusetts have been deprived of their right to acquire arms for defense of hearth and home for too long during a time where it is most critical.”

“State and local governments cannot suspend the Constitution and its guarantee of fundamental human rights,” FPC President Brandon Combs said. “Individuals have a human right to acquire firearms and ammunition for self-defense, and the need for self-defense is especially important during uncertain times. This important victory means people in the Bay State can exercise their right to keep and bear arms.”

Of course, this is not the end of the case. It is only a preliminary injunction. But still, this relief should mean something for the good people of Massachusetts.

With NYSRPA off the Supreme Court docket, what could be the next 2A case?

I’m sure I’m not the first person you’ve heard talking about guns and the Supreme Court this week. It’s been a bit of a news item. That said, with NYSRPA off the docket, the Court is mulling over ten Second Amendment cases at conference. Here’s a brief summary of them:

Mance v. Barr comes from Texas and it challenges federal restrictions on the out-of-state purchase of handguns.

There are three cases against the state of New Jersey – Rogers v. Grewal, Cheeseman v. Polillo, and Ciolek v. New Jersey – all of which challenge the state’s “may issue” (read: pretty much never issue) permitting scheme for carry licenses.

Malpasso v. Pallozzi covers the same problem as above, but in Maryland.

The last two cases are from Illinois; Culp v. Raoul, which challenges the state’s policy of only issuing out-of-state carry permits to residents of certain states, and Wilson v. Cook County, which challenges another one of those silly “assault weapon” and “high capacity magazine” bans.

None of these cases have made the Supreme Court’s docket yet, but the High Court will be holding another conference on May 15, and we hope to see at least a few of these cases over the next session.

On Tuesday, Judge Jones denied a request for a preliminary injunction in a challenge to the State of Georgia's laws criminalizing carry outside the home, and Cherokee County's closure of Georgia Weapons Carry License program. Of course, the case is far from over. The next major due date is coming next month, where plaintiff’s opposition to the County’s motion to dismiss is due.

With sales up, Republican Senators are trying to meddle with NICS

I don’t know what’s in the water, but it seems like Republicans are coming out of the woodwork to make life more difficult for gun owners. As I’m sure you’re already aware, gun sales have skyrocketed since the start of the coronavirus pandemic. Although there has been a fair amount of repeat business, a lot of the sales are to new gun owners. How much have sales increased? 71.3% over the previous year for the last two months.

When sales increase, so do background checks. Realizing that now is the perfect time to sing for their supper, the FBI has been appealing to Republicans, trying to secure funding to expand the NICS background check system. So which Republicans are supporting this “improvement” plan? Senators like John Cornyn and Ted Cruz. Cruz, who famously cooked bacon on the barrel of an AR-15, claims to be a “constitutionalist,” yet here he is supporting the spending of taxpayer dollars on a broken system that only serves to impede the ability of Americans to exercise their constitutionally enshrined rights.

Oddly enough, these Senators are pushing for legislation that would expand NICS at the same exact time as Democrats who are advancing bills like Senate Bill 3254 and a host of other legislation which would use this system to do things like create a national registry and expose gun owners to state surveillance and civil harassment. I guess infringing on our rights is one of the few things in Washington with bipartisan support.

It seems that ever since the shutdown began, the justice system in Texas has been going ham on people that want to do things like engage in commerce and feed their children. Earlier this week several people gathered outside an establishment in Odessa, Texas to protest the state’s forced closure. Sure enough, these Texans were armed.

Given that these guys were protesting, I’m sure they expected to have an encounter with the police, but given the sheriff’s previous pro-gun statements, they probably didn’t expect to be greeted by Meal Team Six, who thought it would be appropriate to bring their armored vehicle, and carbines while the protesters were sitting in lawn chairs drinking beers.

Since we’re supposed to trust the police with our lives, you would hope they’d exercise (hah) even a modicum of restraint or reasoned judgment. When the sheriff and his lackeys arrived at the scene, the first thing they did was pace forward on the protesters with their firearms pointed at center mass. Considering the protesters never actually brandished their firearms or gestured toward the police in a threatening way, a simple dialogue probably would have sufficed.

Since the arrests, Sheriff Griffis has been facing calls to resign. I don’t know what’s worse, his extreme tour de force, or his subsequent doubling down on using the armored vehicle “whenever possible.”

Pandemic has some Americans hunting for food

A natural, but unfortunate result of pandemics is the disruption of supply chains, which means that the junk you ordered online might be a little late getting to your door. More unfortunate is that if the situation continues to devolve, the supply chains for more important things start to degrade. Over the last several weeks we’ve begun witnessing this happen to the country’s meat supply. But when Tyson closes the door, the Second Amendment opens a window; Americans have begun hunting for their food again.

Hunting permit applications are going up in places like Indiana, where we saw a 28% increase in turkey licenses as people have begun growing tired of finding empty shelves at the supermarket. Not only are people going hunting for sustenance, but they’re also going out to the woods for a temporary reprieve from being stuck in their homes due to state lockdowns.

With all the shenanigans state and local police are engaged in, like domestic surveillance, arresting scarecrows on the beach, and beating people in the street for insufficient social distancing, it’s hard to believe that nearly half of the country’s state attorneys general were able to undersign a letter begging the federal government to exercise more police power over Americans. The letter, addressed to Senators McConnell, Graham, Feinstein, and Schumer begs them to “reinstate” the VAWA, the contents of which abuse the law to violate due process.

The new VAWA being pushed by these AGs does far more than they lead on. It sneaks gun control into a statute which, for years, had no mention of the term “firearm.” It drastically and vaguely expands the amount of misdemeanor crimes that can result in a permanent loss of civil rights, and expands the definition of “intimate partner” in an attempt to “close the boyfriend loophole.”

The problem with the “boyfriend loophole” is that it’s not a loophole. The law has certain effects when a victim of domestic violence is living with their partner. The new VAWA wants to take this to an extreme, to include people who do not live together, and are not even still in contact. The version of the VAWA being pitched by these attorneys general would expand the term “intimate partner” to include not only the ex-partners, but even roommates who live with or previously lived with them. And there seems to be no limit on how long ago you might have lived with someone, opening the scheme up to abuse.

John Adams once said “there is danger from all men. The only maxim of a free government ought to be to trust no man living with power to endanger the public liberty.” And who has more power than politicians who can write the law? Following a protest of Michigan’s economic shutdown, state legislators are proposing that firearms carry be banned at the capitol.

Unsurprisingly, Democrats were dramatic about the incident, one of whom was wearing a bulletproof vest while sitting on the floor. Also unsurprising is moderate Republican John Truscott, a self-proclaimed Second Amendment advocate who said he was “very disturbed” and that the legislators “do not like seeing guns brought into the building.” While the Michigan Capitol Commission has been mulling over changing the right to carry without referendum. We’ve also had the pleasure of witnessing the hypocrisy of State Rep. Sarah Anthony, who brought in her own armed private security detail shortly after the protest.

Last tuesday, New Mexico Governor Michelle Lujan signed into law a fairly typical red flag bill. This time there was a twist, though. With the stroke of the pen, came an urging to sheriffs: “either enforce this ineffective, immoral law that your people hate, or resign.” (paraphrased)

Lujan believes the red flag law will give law enforcement an “urgently needed tool to deter deadly violence.” Of course, as I’ve thoroughly covered, these laws do a lot more harm than good.

Lujan is a bit chafed, it seems, by some sheriffs from mostly rural areas that opposed the bill as a violation of the right to due process, free speech, and to bear arms. Shocked that an official might uphold their oath and refuse to enforce an unconstitutional law, Lujan remarked “If they really intend to do that, they should resign as a law enforcement officer and leader in that community.”