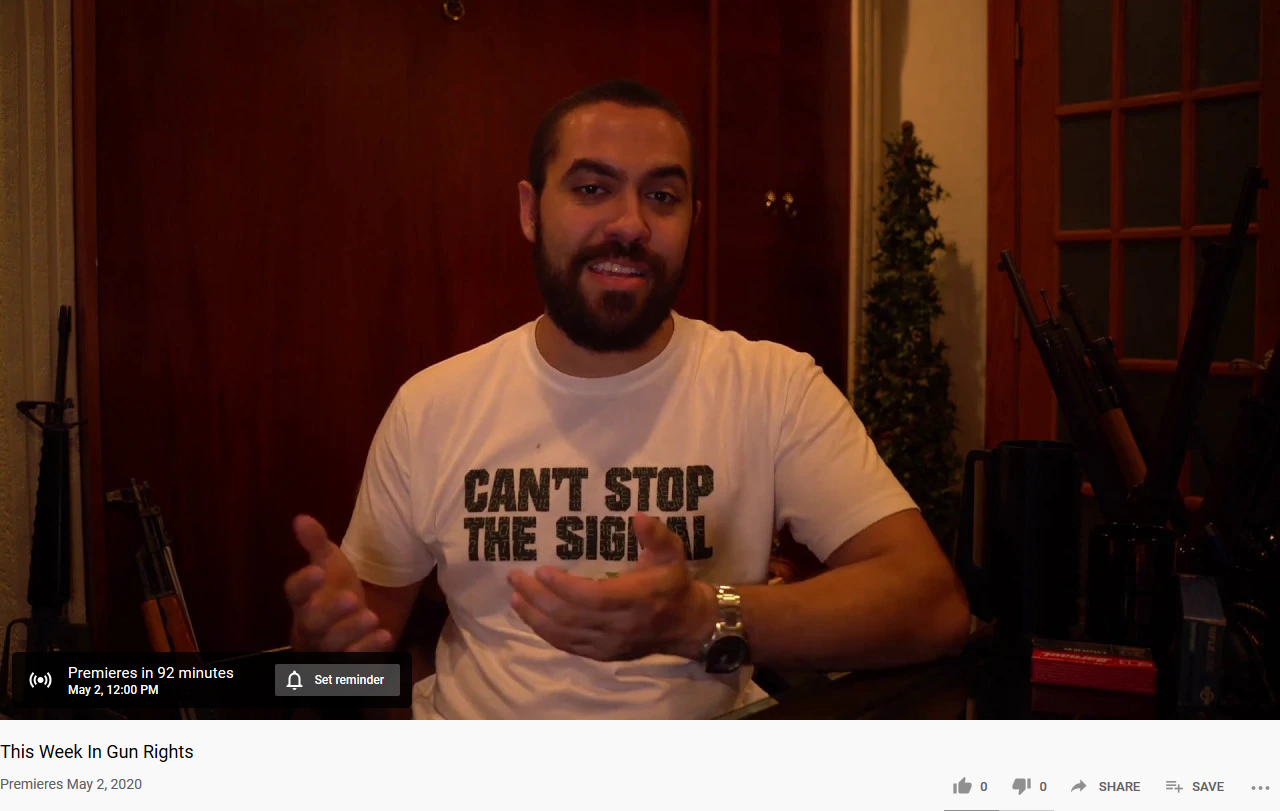 Illinois may have just criminalized carrying firearms during the coronavirus pandemic.

In Illinois, it’s generally illegal to wear a mask while carrying a firearm. This isn’t an uncommon prohibition; many laws have been passed over the years to prevent organizations like the Ku Klux Klan from concealing their identities while armed for obvious reasons. Unfortunately, well-intentioned laws often result in perverse outcomes, like when Governor Pritzker issued a mandate compelling residents of Illinois to wear masks in public. What does that mean for concealed carry permit holders? It means that if they step outside with a firearm they are violating the unlawful carry statute I just mentioned by default.

Realizing the conflict of law, the Illinois State Police issued a statement attempting to put CCW permit holders at ease, but all they did was fuel the confusion. In the statement, the police indicate that the Executive Order from the Governor, who is a rabid gun-control advocate (and whose family isn’t even following his guidelines), “does not require or suggest” arresting or charging CCW permit holders for carrying while wearing a mask. It’s important to note here that this DOES NOT MEAN THE POLICE CANNOT ARREST OR PROSECUTE people who concealed carry while wearing a mask.

When asked about the obvious conflict by the press, Governor Pritzker said that the guidelines published by the police indicate that concealed carriers would not be at risk as a result of the Executive Order, but as you can see above, that’s only small consolation. All I can say is, be careful. The government doesn’t always do what it says.

Gun rights activists across all social media platforms have been flooding Hi-Point with requests for parts kits. The accompanying memes have been pretty hilarious, focusing on “Mr. Hi-Point” and all the profits he’d presumably make if he followed the memers’ demands.

So why do people want Hi-Point parts kits? Well, if you remember a while back we covered the “Lo-Point,” a 3D-printable Hi-Point frame. Well, the design was hugely popular, and quickly outstripped the supply of Hi-Point parts kits. Before the design came out, you could get your hands on parts kits for $30 or so. Now, though, the few kits available are selling for way more than a complete firearm.

Clearly there’s a market for partial ‘points. People who want to be able to lawfully exercise their right to self-build firearms. The Hi-Point is kind of uniquely suited as a home-build firearm project because of its unlocked breech and stationary barrel. I, for one, hope “Mr. Hi-Point” comes around.

It’s no secret loads of firearms were purchased with stimulus checks. You might think this was a flood of enthusiasts, but as it turns out, a lot of the guns that were purchased with the corona stimulus money were bought by first-time gun owners concerned about future economic conditions. While some recommend putting money away in situations like these, I have to say you can’t go hunting with a hundred-dollar bill. As far as those first-timers go, we’re glad to have them join the fold, and I hope current gun owners and local organizations engage in outreach to welcome them to the community and get the training they need.

Remember when I mentioned last week that ghouls never let a tragedy go to waste, and that the Prime Minister of Canada was pushing for new gun bans? Well, it’s coming down the pipe. Because of the way our northern neighbor’s government is structured, their executive branch is able to pass regulations using what’s referred to as an “order-in-council”, which means Canadians can’t even make appeals to their representatives in parliament. The ban will include a number of semiautomatic rifles, and it will be followed by legislation pushed by Trudeau’s party.

All else aside, there’s no proof to show that a ban like this will prevent access to firearms that do the same thing. Historically, whenever something is banned, people always find a workaround, creating black markets for bootleg or banned products. This will only create more government-defined crime, which will then be used to justify additional gun control. An annoying, yet vicious, cycle. This, like most legislation, isn’t about keeping Canadians safe. It’s about control.

This week the Supreme Court sent back NYSRPA v. NYC as moot. Some fear the Court’s decision sets a dangerous precedent, signaling to anti-gun jurisdictions that it’s okay to pass unconstitutional legislation and then repeal it when it’s challenged in the courts. That concern is pretty legitimate.

The City vigorously defended this law, getting favorable judgments both in a federal district court and the Second Circuit. That is, until January 2019, when the Supreme Court agreed to review the case.

Shortly thereafter, the city changed its law, and worked with the state of New York to amend its law so the city could not pass the same actions again. The only plausible explanation for this activity is that New York City wanted to “moot” the case, eliminating the “live” controversy, so the Supreme Court would be unable to provide relief and thus not hear it.

In light of this, on April 27, 2020, six of the Court’s justices voted to send the case back to the lower courts on the question of “whether petitioners may still add a claim for damages in this lawsuit with respect to New York City’s old rule.” That is to say, whether, despite the city’s attempt to moot the case, the plaintiffs can maintain a case that the courts can address.

Petitioners raised several other issues that remain with New York’s law, including that petitioners may not be allowed to stop for refreshments or restroom breaks when traveling with firearms. The city responded that this would be permissible. The Court refused to address that dispute at this time.

The case will be handed back to the Second Circuit and the district court, where the parties will argue whether plaintiffs can make a claim for damages under the law as it was before the City changed course.

Still, the Justices are signaling that they’re looking for another case, if not multiple cases, in which to step into the 2A area. There are loads of cases for the Court to choose from, like requiring a “justifiable need” to obtain a permit to carry a handgun, bans on commonly owned firearms, and state bans on non-resident permitting for concealed carry.

Mayor Chokwe Antar Lumumba, of Jackson, Mississippi, decided to start playing games last weekend, banning open carry of firearms during the coronavirus pandemic. Citing authority he believes to come from his emergency powers as mayor, Lumumba, who is a pal of Mike Bloomberg, instituted the ban despite a law on the state books prohibiting towns and cities from passing gun restrictions. Despite the state Attorney General being courteous enough to send him a letter explaining that a mayor can’t override state law (gee, I wonder who he learned that from), Lumumba remained defiant, and is now facing a lawsuit.

Phil Murphy is being sued yet again, this time for barring a member of the New Jersey Second Amendment Society from attending his regular coronavirus briefings. Why would a politician as respectable as Phil Murphy, the guy whose police arrested Jewish citizens for attending a rabbi’s funeral, ban someone with constitutional concerns from attending his daily briefings? According to the complaint, retaliation. Mr. Roubian, who serves as a member of the press for NJ2AS, alleges that Governor Murphy is barring him from attending press briefings because NJ2AS filed a lawsuit against him for the closure of gun shops across the state. This guy must love getting sued about as much as he hates the First and Second Amendments. Freedom of the Press is a fundamental principle of our Republic, even (especially) if it’s the 2A press.