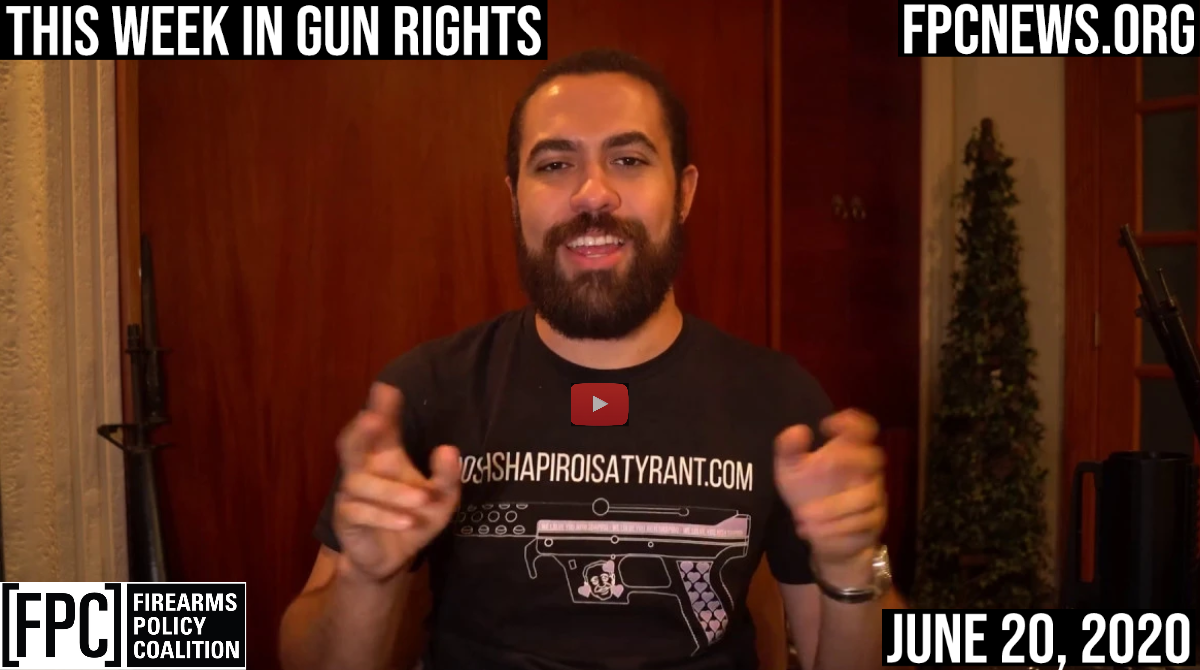 If you’ve spent any time on social media this week, you’re probably well aware that Congressman Matt Gaetz has written the ATF a letter about their plans to ban arm braces for AR-15s. If not, here’s a quick summary: the ATF may have been trying to discreetly re-classify certain pistol braces as “stocks.” Braces are often used for AR-15 pistol configurations, as they aid the operator in maintaining control of the pistol while using one hand.

The reasoning, the exact text, and how much the ATF has done is uncertain. Were they motivated by the Supreme Court’s decision to ignore all ten pending Second Amendment cases this week? Are they anticipating a Biden win in the general election in November? Is it simply an ideologically motivated power move? Are they simply animated by a callous disregard for our liberty, the rule of law, and our Constitution? Maybe it is all of the above.

What matters is that the ATF, an agency that exists under the Executive Branch, whose members are not elected, and who are not generally accountable (or even really known) to the public, have made up and begun exercising a power to categorically ban certain firearms based solely on their preferred, randomly shifting, interpretation of various definitions under gun control diktats such as the National Firearms Act and the Gun Control Act of 1968.

Just as was the case with bump stocks, the ATF has stated publicly that a number of these items are lawful to own. These assurances came in the form of opinion letters sent to various manufacturers such as SB Tactical, and included clarification stating that certain braces could also be shouldered “incidentally” after the infamous “alchemy” letter that said shouldering a pistol constituted a “redesign.”

Of course, despite these frequent assurances, the ATF may have again decided suddenly and arbitrarily that braces are suddenly unlawful. But how surprised are you, really? You can read FPC’s formal statement on this issue here.

Jackson, Mississippi Mayor Lumumba learned a hard lesson last Friday: the Constitution still applies, even during a crisis. Back in April, the mayor issued an order declaring open carry of firearms to be unlawful during the COVID-19 state of emergency. Not only was the order wholly unconstitutional, it was totally irresponsible from a practical perspective - if the residents of Jackson cannot rely on the government to keep them safe, why should their ability to protect themselves be frustrated? The order issued by the federal judge, which you can read here, includes a decree where the city of Jackson acknowledges it lacks the authority to issue such gun restrictions, and where it agrees not to attempt to do so in the future.

Governor Northam has been pushing gun laws through the Virginia Legislature since the new legislative session began late last year. This week, Valerie Trojan, aided by Gun Owners of America and the Virginia Citizens Defense League, filed a challenge to a new gun rationing law, which is slated to become effective on July 1. Ms. Trojan intends to purchase multiple firearms this summer, presumably as gifts for her family. In the complaint, the plaintiffs claim that the law is impermissible under the Virginia Constitution, and that restriction of constitutional rights cannot be based on the frequency with which they are exercised, explaining, to the certain chagrin of Northam, that just as the state has no authority to place a limit on the number of times someone might exercise their other rights, it lacks the authority to do the same when it comes to buying a gun. We’ll be watching this case closely, and wish all the best to the plaintiffs.

The internet is forever. This is something that most people understand, but apparently not former-Mayor Bloomberg or Rahm Emanuel and other members of the Obama Administration. Files recovered by Judicial Watch and recently republished by the good folks over at Moms at Arms show that less than 24 hours after the mass murder at Sandy Hook Elementary school, Bloomberg staffers conspired to make him out to be a hero by promoting his gun control agenda. They suggested that he use survivors of the incident and celebrities to create commercials. Two days after the incident, then-Secretary of the Department of Education Ann Duncan and Rahm Emanuel were in correspondence. Emanuel suggested that they push for a vote on banning so-called assault weapons within a week, “before it fades.”

Are Chicago police no longer responding to shootings?

With the state of things in major cities across the country, it is unsurprising that calling for emergency assistance is difficult. In fact, we talked about the situation in Chicago just two weeks ago. Now police in the Windy City have been caught in radio chatter, indicating that they may have no desire to take any action, even if they expect violent crime to occur. In an uncovered audio cut, unidentified officers are informed of a shootout between “gangbangers.” Instead of requesting more information, at least two officers respond, the first saying “let ‘em do it,” and the other saying “let it be.”

This type of situation puts to a point why our Second Amendment right is so essential. When we can’t depend on the state to protect us, we have to depend on someone. Like everything else in life, when those we count on fail, the buck stops with us.

The “reopening of the economy” has created an interesting scenario for both consumers and retailers. While many businesses have insisted on requiring customers to wear masks when they enter their stores, a gun store in Florida has instead insisted on a no-mask policy. Alex Shkop, owner of Guns and School Training Center in West Palm Beach, insists that his policy is for safety, expressing concern about would-be robbers. The natural result of the policy is a lack of protection for the shop’s employees from potential exposure to COVID-19 (masks are intended to keep other people safe). Both concerns are equally valid, but after all the compulsory closures of these stores by anti-gun state governments, I can only hope that this doesn’t create problems for gun shop owners in the case of a second wave of illness, or attract attention from the state.