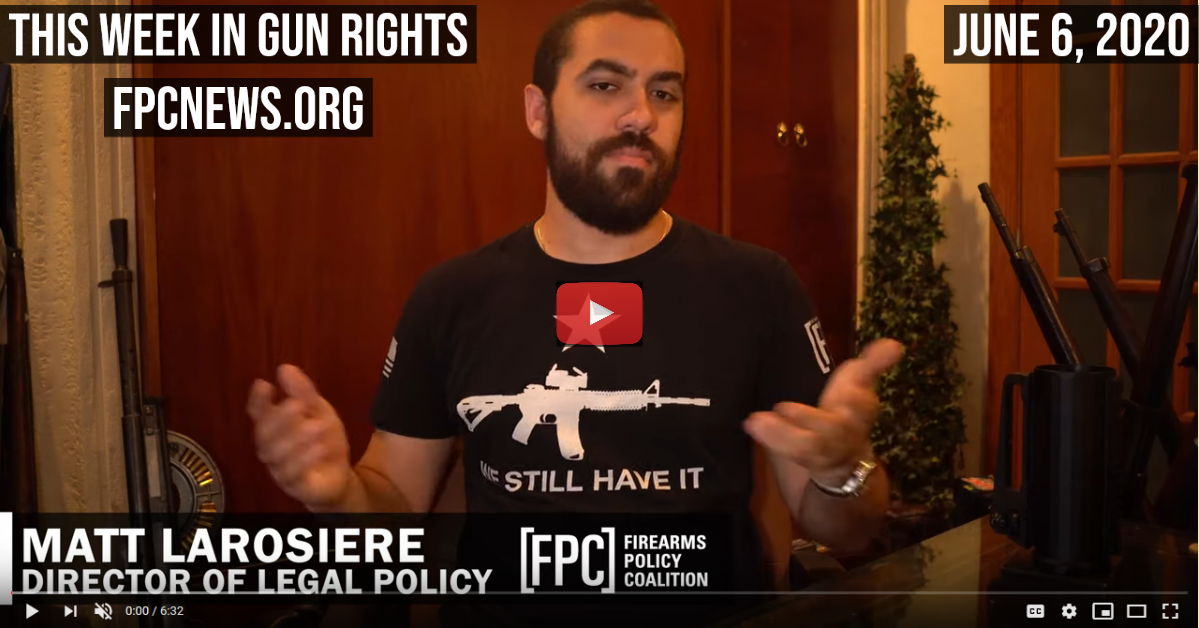 We’ve talked before about “Ban Assault Weapons NOW,” a group supported by a bi-partisan slurry of donors in addition to traditional anti-gun types, was pushing to add a ballot initiative for this election cycle to, well, ban assault weapons.

This Thursday, the Florida Supreme Court issued what’s called an advisory opinion regarding the initiative, concluding that the initiative should not be placed on the ballot. The reason is pretty straightforward. There is a summary that accompanies ballot initiatives intended to explain the initiative’s practical effect, and the one drafted by BAWN was defective.

Specifically, the Supreme Court found that the initiative summary was written in a way intended to mislead voters because of the way it described the “grandfather” provision. The way the law is actually written, anyone who owned an assault weapon before the passage, would be able to continue owning that weapon. They would not be able to transfer it. The ballot summary misled by suggesting that the weapon itself was exempt, rather than the individual’s possession. I think Florida’s high court hit the nail right on the head, and am glad my fellow Floridians are safe from this proposal. For now at least.

On Friday, news broke that Sacramento area law enforcement were spreading around a bulletin warning about the “Boogaloo movement,” which it describes as “antagonists” who “attempt to provoke and incite rioting and violence” and are “typically pro-gun, anti-authority, and beleive in aspects of far-right extremism.” The bulletin unironically referred to members of the “movement” as “Boogaloo Bois.”

Rob from Sacramento Black Rifle posted a video detailing his frustration that, after posting the law enforcement bulletin, officers were sent to his business to request he take it down. Full of righteous indignation, he detailed the tremendous First and Second Amendment concerns with this targeting. Rob is right to be upset. Treating American gun owners, who are overwhelmingly the most law-abiding people in the country, as if they were a threat to the public, shows that law enforcement need to do some serious introspection.

Jake Fromm, a rookie sports man for the Buffalo Bills, wound up in hot water on Thursday when screencaps from a 2019 text conversation were exposed on Twitter. The conversation revolved around firearms, and Fromm said “[j]ust make them very expensive so only elite white people can get them haha."

This sentiment kind of cracks close to the reality of gun control. All it does is increase costs, driving away people who may need weapons most. In America, everybody has the right to keep and bear arms. That’s why we listed those rights in the Second Amendment. That means poor people, people of color, the LGBT community - EVERYONE.

Joe Biden’s latest consideration for VP running mate is Valerie Demings. Over the last week we’ve seen massive protests and innumerable instances of police brutality against Americans. Despite this fact, Everytown for Gun Safety is promoting Demings, a former police chief for the city of Orlando, Florida. Demings purportedly opposes police brutality, but the Orlando PD was under investigation while she was chief. In 2010, “the agency used force 574 times, 20 percent more than officers in Baton Rouge, a similarly-sized city with a similar minority-majority population mix and a police department of about the same size.” In the same year, one of the department’s officers broke an 84-year old man’s neck using a takedown maneuver.

So why is Everytown pushing Demings as a running mate for Biden? Because she’s a gun control zealot. At the end of the day, Suburban Sharon Watts and her affluent authoritarian friends couldn’t care less about the police abusing civilians. In fact, they just want to make it easier for the police and other criminals to harm innocent people by depriving them of their right to arms.

Biden thinks police should shoot suspects in the leg

Sweep the leg, Johnny! We’ve been witnessing an immeasurable amount of stupid in 2020. Murder hornets, megaviruses, and politicians advocating for moronic policy changes that won’t have any impact whatsoever on the state of our society (Rep. Amash’s bill for abolishing qualified immunity aside).

Just when I thought I’d seen enough, Joe Biden comes out of nowhere with a totally brilliant idea - instead of suffocating suspects or shooting protesters in the face with pepperball rounds, the police should just shoot people in the leg instead. Nice.

First, arteries are a thing. Second, most cops only use their guns annually, for accuracy qualifications from an easy distance and using a non-moving target. Third, history has shown us that the police are notoriously inaccurate when it counts, often shooting themselves and innocent bystanders. And fourth, but most important: you shouldn’t be shooting people AT ALL if they’re not threatening or using lethal force or committing a violent felony.

Chicago Mayor says don’t use your gun, call police instead

Chicago Mayor Lori Lightfoot, another Shannon Watts crony, recently spoke on gun violence in her city. Instead of talking about the gang problem in the South Side and elsewhere, Lightfoot spoke about self-defense, and why you shouldn’t do it. Specifically, Lightfoot said that if you end up in a situation where you might need to use your gun, don’t do it, and call the police instead. You know, so they can find your body in a couple hours.

Lightfoot is guarded by about 75 police officers at any given time, so her experience is remarkably different from people who live in communities in, say, the South and West sides of Chicago, where allocation of emergency response services has historically been lower than in more affluent neighborhoods. The Chicago PD’s radio communications system has already been hacked, disrupting their ability to dispatch units, so even if they had the resources to serve those underprivileged communities, odds aren’t looking incredibly good for would-be victims without an effective means of self defense.

West Palm Beach mayor Keith James signed a Declaration of Emergency on May 31st in response to “widespread disobedience of the law, and substantial injury to persons or to property.” There is a terrible interplay here between state and local law. Under Florida law, when a mayor declares a local emergency, certain changes are instant, and others are discretionary. Firearm prohibitions are among the automatic, mandatory results of a declared emergency. State law requires that, under a local emergency, no firearms or ammunition be sold or displayed by businesses, and the people are prohibited from possessing them in “public areas.”

First things first: the point of having a well-regulated Militia is to maintain the capability to secure life and property in the event of precisely these types of hard times. We already spent a lot of time addressing these kinds of unconstitutional bans during the COVID-19 quarantines, and many courts rightly agreed. I think this ban, as far-reaching and irrational as it is, is clearly unconstitutional.

Guns still flying off the shelves

Oddly enough, government tyranny seems to increase gun sales. Last month an estimated 1.7 million firearms were sold in the United States, an increase of 80% over May, 2019. This is presumably in response to the deployment of military and national guard forces in major cities across the country along with politicians like President Trump saying things like “when the looting starts, the shooting starts.” Not only are sales increasing, but stock values for firearms manufacturers are also skyrocketing, the rise being mostly attributable to first-time gun owners from traditionally anti-gun backgrounds.

While the destruction being wrought in our country is tragic, it has forced people to realize the value of their enumerated rights, specifically the right to keep and bear arms. Many people, especially city-dwellers, may be coming to realize that government agents may not be there to help when times are really tough. I wish the best of luck to those new to the fold.

Democrats are no stranger to the concept of taxing your ability to exercise your rights or engage in vices that don’t harm anyone but yourself. In the same vein, the Seattle city council imposed a “gun tax” in 20 15, which according to Councilman Tim Burgess would raise somewhere between $300,000 and $500,000 annually. Taxes on the right to keep and bear arms are wrong. Not only are they unconstitutional, but they discriminate against the poor and are usually an attempt to prevent them from exercising their right altogether. What’s funny about the whole thing is that instead of raising the half million dollars the council thought they would raise, they only gathered $93,000, while driving gun stores out of the municipal limits, further reducing their tax base. Nice work, Seattle.

It seems many Canadians have had aboot enough of Trudeau’s gun-banning shenanigans. Jason Kenney, the Premiere of Alberta province has said that he is considering legal action against the Canadian government. Explaining that politicians in the capital of Ottawa often reach for low-hanging fruit like gun bans, such solutions rarely if ever solve the problem they’re intended to address and are ultimately implemented for the sake of optics - sound familiar? Kenney said that Alberta would be pushing for more regional control over gun regulation, but given the considerable amount of centralized power in the Canadian government, it’s uncertain whether the province can assert this kind of authority.