We know there’s a long, tough fight ahead of us. Just last week, anti-gun bureaucrats approved the same anti-gun "Bullet Button Assault Weapon" regulations that had been pulled back and totally rejected before…

One more thing we have to challenge in court, and one more reason to continue fighting for justice and the Second Amendment right to keep and bear arms -- whatever it takes.

And DOJ’s new "Bullet Button Assault Weapon" regulations are just the beginning. Over the coming months, DOJ is also required to push out new regulations on ammunition purchases and vendors, “ghost guns” and forced serialization, and more.

But here’s something the State of California doesn’t want you to know: it recently sent a check for our legal fees -- $38,025.80, to be precise -- in our last victory over DOJ and an unconstitutional state law last summer.

And, if you help us match DOJ’s “donation” today, not only will you help us get ready for the next series of legal dogfights to defend your rights -- you’ll automatically be entered into our August giveaway for a Kimber Raptor II 1911 handgun!

We’re re-investing our victory over DOJ back into more pro-gun legal action for YOU.

We want to be in a position to take whatever action is necessary to defend law-abiding gun owners and individual liberties from the long arm of an angry, anti-gun DOJ.

Won’t you consider chipping in $25, $50, or whatever you can to stand with us and help FIGHT BACK? 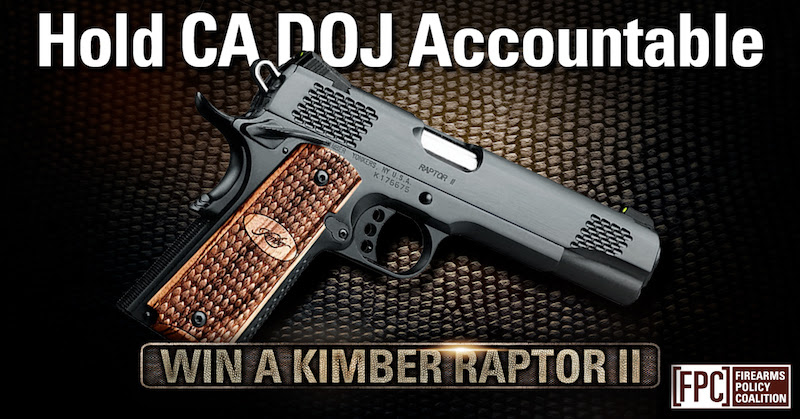 This is going to be a long, tough fight -- and we can only win with your support.

Please, chip in to fight DOJ and these insane anti-gun laws today!

Thank you very much for your time, generosity, and support.