This is getting way out of hand.

Earlier this week, NPR reported on the high number of school shootings alleged by the U.S. Department of Education. The 240 school shootings detailed in the department’s report on the 2015-2016 school year was significantly higher than other estimates. So NPR, with the assistance of the non-profit group Child Trends, began doing what good journalists do: they collected data.

Over a period of several months, they contacted every school. What NPR found was startling.

A colleague of mine, Sean Malone, shared NPR’s article—which carried the headline ”The School Shootings That Weren’t”—with a few thousand Facebook friends and followers on Tuesday.

It was flagged as spam and removed. 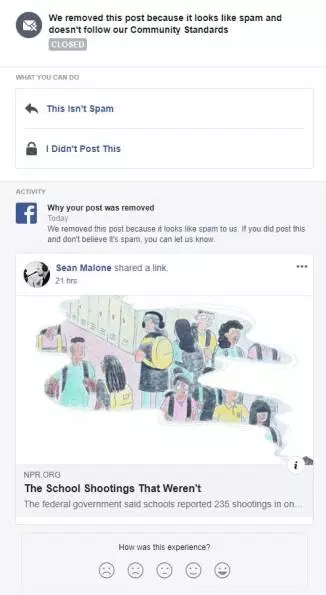