Gabby Giffords is ramping up her efforts to bring California-style gun laws to Arizona.

A few years ago, Gabby Giffords and her husband started Americans for Responsible Solutions (ARS) - but their “responsible” solutions are anything but. Their responsible solutions are really the same agenda Bloomberg and Moms Demand are attempting to enact in Washington and Oregon with their West Coast Wall of gun control - laws which erode the rights of law-abiding people and do nothing to stop criminals.

Though Giffords and her husband claim they are “gun owners and strong supporters of the Second Amendment,” ARS posts articles titled “Five Things You Need to Know About the Dangers of Silencers,” perpetuating the Hollywood stereotype that silencers = murder (and deliberately ignoring the fact that gun owners want them for hearing protection).

Now Giffords’ group has partnered with the Law Center to Prevent Gun Violence - a group which gives gun grabbing legislators “toolkits” to help them draft gun control laws. In their latest state ratings of state gun control laws, Arizona gets an F. 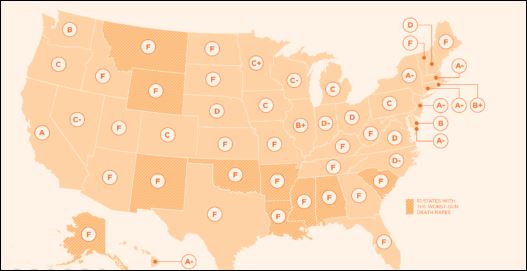 So it’s not surprising that they've formed a state-level group in Arizona, “Arizona Coalition for Common Sense." They'll use the same formula the anti-gun crowd is using in Nevada - funnel campaign contributions to ambitious politicians who will introduce anti-gun bills, and use the initiative process to deceive voters and pass their gun control agenda.

They haven't had success this year, but they'll keep trying. We, the Second Amendment community, need to be vigilant and not give them any ground.