The Truth About Gun Control

This month FPC and Kevin Dixie are proud to be giving away four of Dixie’s incredible “The Truth” custom firearms -- with custom cases that each speak to an important piece of history -- in order to help us build a legal action war chest to defeat racist and oppressive gun control.

“A lie incited white men to slaughter and destroy this black community. Present day politicians lie to convince us to destroy ourselves.”

Those words are inscribed in a special full-custom “The Truth” handgun case made for FPC by the renown Second Amendment activist and firearms trainer, Kevin Dixie, to describe the 1923 Rosewood Massacre and the present-day gun control movement.

Rosewood, according to Dixie, is one of the many forgotten stories of gun control that resulted in the mass killing of African-Americans---in part by government officials.

Before we share more about the racist history of gun control and the Rosewood Massacre, we wanted to bring this forward for a minute.

All over the news today, you see examples of government tyrants pursuing Jim Crow-like gun control policies. Virginia Gov. Ralph Northam’s unconstitutional attacks on the Second Amendment is just one example. And with so many in today’s media and government trying to repeal or redline the Second and Fourteenth Amendments, it’s more important than ever to fight for those rights.

FPC fights for ALL THE RIGHTS, ALL THE TIME. That’s why Kevin is partnering with us to give away four of these awesome The Truth handguns in honor of Black History Month and the continuing fight for freedom for all.

Said Dixie: “I was really, really excited about getting this one out there with FPC because I know that this case hits hard. And I know FPC is a hard-hitting organization, and I know I’m loud and abrasive. And I was like ‘what a great combination, let’s go!’”

The tragedy of Rosewood began on New Year’s Day in 1923, when a white woman -- who was having an affair at the time -- told her husband that “a n*****” assaulted her. Her false claim resulted in the sheriff of Rosewood, Florida, and a group of men going door-to-door, looking for the alleged black assailant.

But the mob the Sheriff created ultimately became uncontrollable, and participated in a week-long assault on the community… resulting in rape, murder, arson, and the near total destruction of the entire community at the hands of the mob -- with help from the local KKK. Thousands of people converged on the town of Rosewood, and they killed, shot, or burned every black person they could find. The few who survived fled, and the town never recovered.

Now, almost a century later, Dixie argues that the government is also using gun control lies to destroy communities much like Rosewood. That’s why Dixie, who owns No Other Choice (NOC) Firearms Training, says firearms are essential instruments of freedom for everyone, and African-Americans in particular.

Firearms, he says, empower individuals to not only stand up for their rights, but defend themselves and their families from tyranny and oppression, whether they come from racists or the government (and sometimes, those are the same thing). And it’s why he makes custom handguns he calls “The Truth” to help tell the story of gun control -- as well as why gun control has historically been used as a tool to keep people and communities of color oppressed.

Each of Dixie’s “The Truth” firearms, which are complete custom handguns, tells a unique, historical story of oppression, and shines the light on government policies that led to these horrible acts of violence. What’s more, each handgun and case has unique artwork and personal inscriptions by Dixie to help tell the story, as well as historical facts to help educate, inform and empower the owner.

The Truth handguns are “giving you a history lesson, literally in a box.” - Kevin Dixie

Also: Kevin’s guns are not safe queens, but are intentionally built to fight.

These The Truth guns are far more than just a collector’s item or mere teaching tool, Kevin says. They are designed from the ground up to be used in effective self-defense. To make The Truth handguns, Kevin starts with a reliable, brand-new HK VP9 and adds a host of custom features like: stippling, a re-contoured slide machined with more serrations, and a Vortex Venom red dot optic. Then, The Truth handguns are fitted into a custom case that is a story in and of itself. 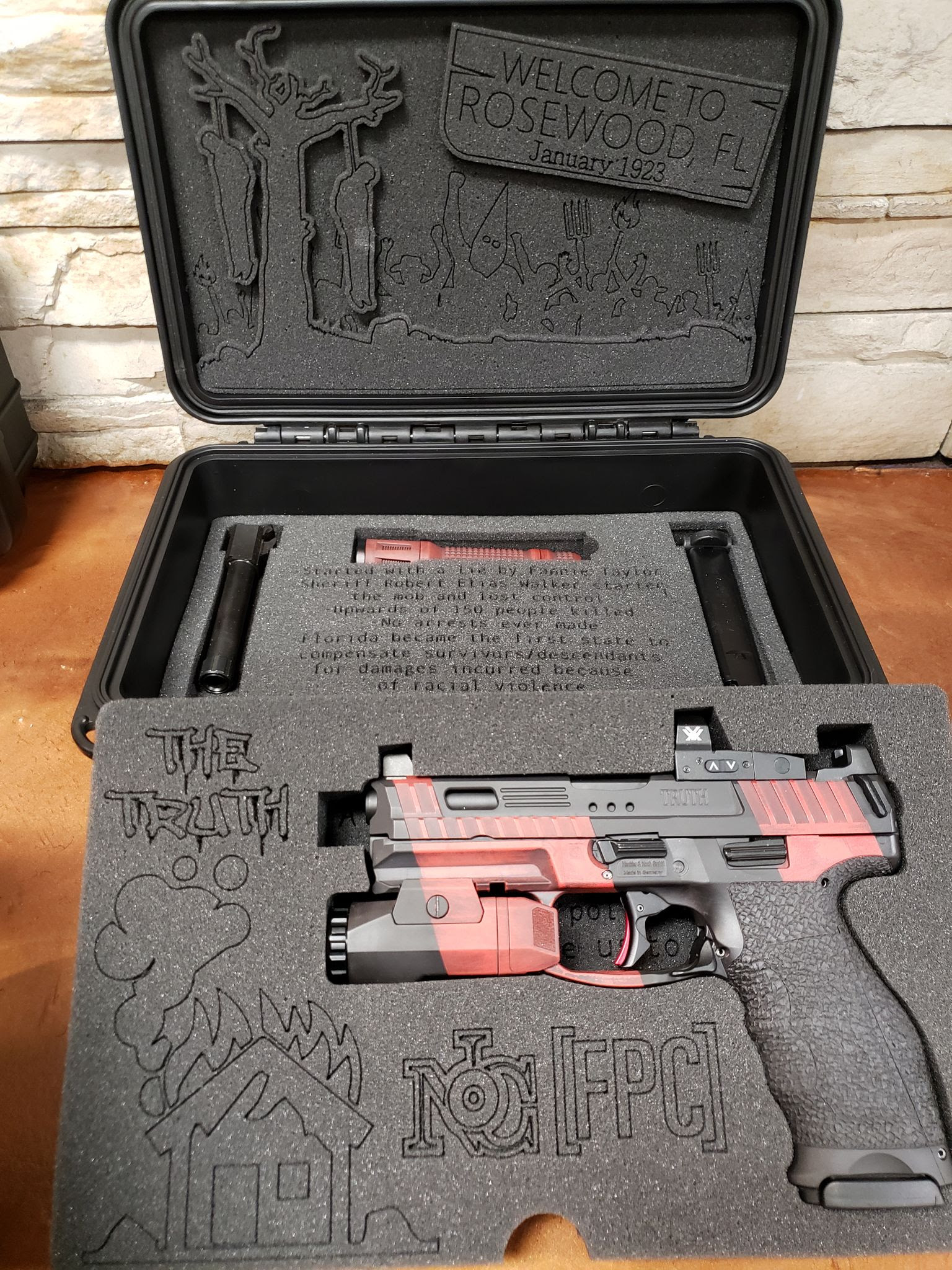 “This is not just a piece of history. This gun is meant to fight.” - Kevin Dixie

Growing up on the streets of St. Louis, Kevin didn’t always view guns as necessary, or even positive. But when he finally got used to the feeling of having a gun in his hand, he discovered how empowering it was to have an effective means of self-defense. And studying history has only strengthened his convictions that firearms are necessary to a free and peaceful society.

“Guns are holistically a part of human freedom... and human preservation OF life.” - Kevin Dixie

Kevin believes that the right to keep and bear arms is one of the most important rights -- because it protects all of the other rights. That’s why we’re so excited to be giving away one of his fantastic The Truth handguns each week in February -- you have four chances to enter and win!

One more thing: Dixie told us that two of “The Truth” HKs he made for our people are not even available to the public yet!

“Two of the lucky winners are going to get cases and guns nobody else has.” - Kevin Dixie

In order to prevent the government from destroying even more communities through disarmament, we MUST fight back!

And we need YOU to help us do it. So donate NOW and be entered to WIN "The Truth"!