Via the NY Daily News:

A group of California gun nuts hoping to disseminate 3D printer plans for a homemade handgun via the internet suffered a misfire Wednesday when Amazon took down their website.

Amazon Web Services removed the entire website called CodeisFreeSpeech.com after receiving a notice of unwanted content regarding the downloadable blueprints for “The Liberator” a 3D-printable single-shot handgun...

The firearm plans, created by the Texas not-for-profit, Defense Distributed, were blocked from the internet by the U.S. Department of State in 2015, prompting a federal lawsuit by the company. The company lost several rounds in the litigation and appeared ready to settle when the Justice Department caved on the lawsuit, granting the company the right to distribute the deadly information.

Wednesday would have been the first day the company could return to spreading the information on making cheap, untraceable firearms. Instead, the attorney general of 11 states and the District of Columbia filed a lawsuit attempting to block the information from getting out.

They argued that the company was giving free and easy access to untraceable, and deadly, weapons that could fall into the hand of criminals and terrorists.

On Tuesday, a Seattle federal judge in the court where the suit was filed, granted a temporary restraining order barring Defense Distributed from posting the blueprints.

A collection of California gun advocates calling themselves the Firearms Policy Coalition stepped into the breach, creating the CodeisFreeSpeech.com site to post the downloadable gun plans.

The group framed the website as a First Amendment, arguing they have a Constitutional right to publish the material.

On Wednesday, after be live on the internet for more than 12 hours, Amazon cut the plug.

“In order to comply with the temporary restraining order, the reported content must be taken down immediately,” according to the complaint filed with the web service.

“The takedown demand from Amazon does not appear to have any basis in law or fact,” spokesman Craig DeLuz wrote in an email. “Amazon has not yet provided further information to the host or us.”

He said they are currently scrambling to find other web hosts. 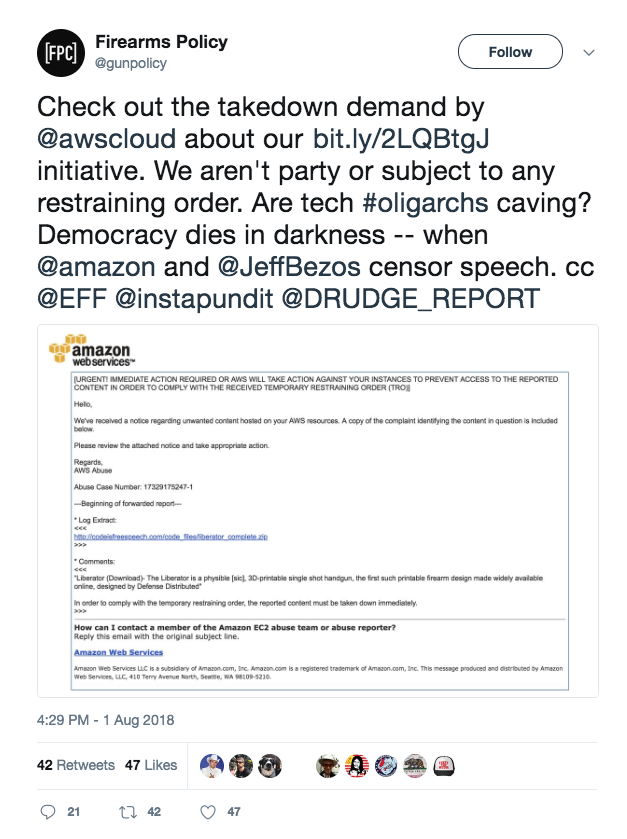