Who needs facts when you have sensationalism, though? 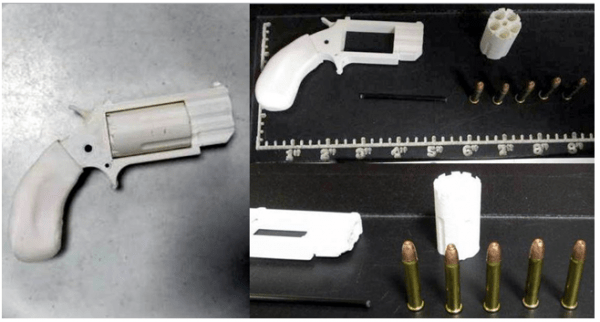 This 3D revolver and five rounds of .22 Magnum ammunition were detected by the TSA at an airport in 2016. But critics say these guns are “invisible” to metal detectors.

Gun control proponents, including some in the press, experienced a couple of embarrassing setbacks last week, thanks to a report from the Transportation Safety Administration publicized by CBS News, and an editorial in the Walla Walla Union Bulletin relating to an anti-gun-rights initiative in Washington state.

In the midst of last week’s hysteria over 3D plastic guns, CBS News reported that, over the past two years, the Transportation Safety Administration had intercepted “thousands of guns” at security checkpoints, including “a handful (that) were created with a 3D printer.” The story was accompanied by an image showing a tiny five-shot revolver and five .22 Magnum cartridges that were detected. The gun looks like a knock-off of a North American Arms mini-revolver.

CBS quoted TSA Assistant Administrator Michael Bilello, who said in a statement, “TSA Officers are trained and on the lookout for 3D guns. We have proven detection capabilities and screening protocols in place. In the world of airport and aviation security, ‘a gun is a gun.’”...

CBS further reported that “in December 2016 and January 2018, 3D-printed parts of so-called assault-style weapons known as “lower receivers” were found in carry-on bags at Las Vegas’ McCarran International Airport.” That would seem to rebut comments made by perennial anti-gun Connecticut Sen. Richard Blumenthal, who claimed that “undetectable” AR15 rifles are “coming to a theater near you; coming to a school near you” in a press event aired by ABC News.