She's probably watched too many Hollywood action movies instead of actually learning about the topic at hand... 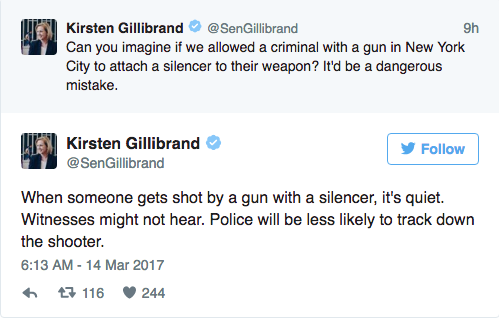 In 2015 the Hearing Protection Act, which would deregulate suppressors and remove a $200 per unit ATF tax, was introduced into the House. Since then, a few different versions have been up for consideration. Now that Republicans are the majority in Congress and with a Republican sitting in the White House, the bill has a decent chance of passing.

Not surprisingly, gun control zealots are opposed to the bill for all the wrong reasons. On Tuesday, New York Senator Kirsten Gillibrand falsely claimed witnesses can't hear gun shots that come from suppressed firearms and argued deregulating this piece of hardware would make it more difficult for law enforcement to solve crimes.