Posted on October 6, 2015 in FPC Coalition Partner News
1.2k
SHARES
FacebookTwitter
On Tuesday, Oct 6th, the House Criminal Justice Subcommittee approved Rep. Matt Gaetz’s Open Carry and Strict Scrutiny bill.
The bill passed committee mostly along party lines, with Rep. Chris Latvala (R-Pinellas) bucking his party to join House Democrats in opposing the Right to Bear Arms.
Video of the hearing can be viewed at http://thefloridachannel.org/videos/10615-house-criminal-justice-subcommittee.
You can join State Rep. Matt Gaetz this Thursday, October 8th at 6:15pm for a live, interactive telephone town hall meeting. Matt will be taking questions about his bill bringing Open Carry to Florida and other issues relating to the upcoming Legislative Session. 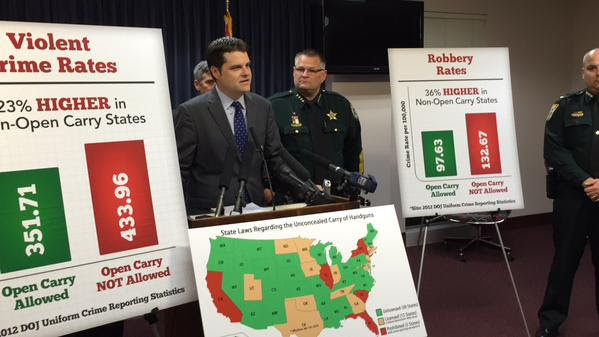 Open Carry is legal in most of the country.  Most often open carry is practiced in very innocuous ways.  For example, a concealed carrier who leaves their coat off while pumping gas or the hiker who openly carries in the field.  Florida’s Open Carry ban is so strict that it would be illegal for a concealed carry licensee to take off a jacket at a friend’s house if doing so exposed a holstered handgun.

There are other times when a law-abiding gun owner may choose to carry openly rather than concealed.  Late at night while getting cash at a ATM, while working outdoors on someone’s property during the summer, or even just running an errand without needing to re-dress to fully conceal a handgun. Regardless of motivation, or even in cases of accidental exposure, Florida’s Licensees have proven that they use good judgement when they carry and should not face criminal prosecution for not hiding their firearms. 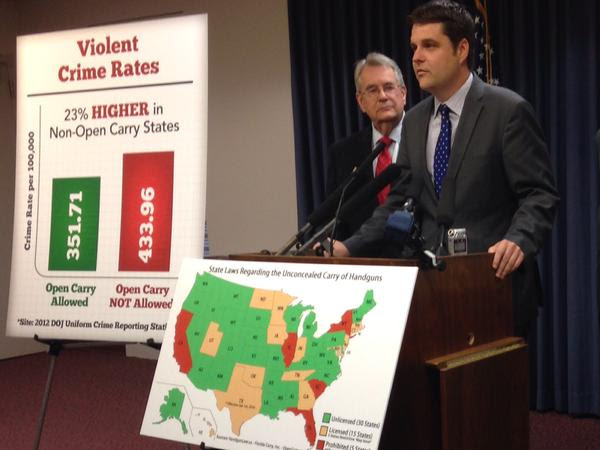 Florida Carry, Inc. is a non-profit, non-partisan, grassroots organization dedicated to advancing the fundamental rights of all Floridians to keep and bear arms for self-defense as guaranteed by the Second Amendment to the United States Constitution and Article I, Sections 2 and 8 of the Florida Constitution. Florida Carry stands to represent our supporters, members, and millions of defensive arms owners of Florida. We are not beholden to any national organization’s agenda that may compromise that mission.

Florida Carry works tirelessly toward striking down ill-conceived gun and weapons control laws that have been proven to provide safe havens to criminals and be deadly to law-abiding citizens.

10 Things Every California Gun Owner Needs to Know on January 1, 2017

The Blaze: Over 98% of Mass Shootings Occurred on Gun-Free Zones, Research Shows